TO CARESS ME IS TO TEMPT DEATH!
When her creepy uncle’s escaped leopard mauls her adulterous husband (Jack May), wealthy Leonora (Barbara Shelley) becomes obsessed by the idea that she is heir to a 700-year-old ancestral curse, causing her ‘to have the cunning and blood lust of a feline’.

Convinced Leonora risks losing her sanity over such ‘delusions’, psychiatrist Dr Brian Marlowe (Robert Ayres) takes her away from the morbid surroundings of the estate to recover at a London sanatorium – but not before Leonora’s elderly housekeeper (Lily Kann) gives her a dire warning: that the curse will follow her to her grave.

Seemingly cured by Marlowe after her spell at the sanatorium, Leonora is released, but the curse has indeed followed her and now it’s Marlowe’s wife Dorothy (Kay Callard) who is placed in mortal danger – for Leonora has long held a torch for the kindly doctor and sees Dorothy as a rival for his affections… Will Marlowe realise his mistake before Leonora unleashes the beast inside her to kill again?

IT’S CAT PEOPLE WITH A DASH OF NOIR BY WAY OF POE
Barbara Shelley, who would go on to become the First Leading Lady of British Horror, appearing in genre classics such as Village of the Damned (1960), Dracula, Prince of Darkness (1965) and Quatermass and the Pit (1967), was just 24 when she made her UK screen debut in this 1957 monochrome chiller, which transposes the Val Lewton/Jacques Tourneur 1942 horror classic Cat People to 1950s Britain.

A curious concoction of psycho-sexual thriller and old dark house cliché, with echoes of Universal’s 1930s horrors, Cat Girl comes from Nat Cohen’s Anglo Amalgamated film company, the same stable that would unleashed such exploitation fare as Circus of Horrors, Konga and Peeping Tom in the 1960s. Alfred Shaughnessy (who’d go on to helm TV’s Upstairs, Downstairs) takes up directing duties, while Lou Russof, who also penned 1950s drive-in creature features like It Conquered the World and The She Creature, provides the screenplay.

Though set in 1950s Britain, Cat Girl could easily have been placed in the Romantic era, in particular the macabre world inhabited by Edgar Allan Poe’s imaginings. Leonora’s name is obviously taken from the author’s poem, The Raven, whilst the curse she bears is straight out of The Fall of the House of Usher. Even the flowing nightgown Leonora wears looks like something that Madeline Usher would have worn in 19th-century Boston. But this is in stark contrast to another scene in which [the very modern] Leonora is seen sleeping naked [we see her exposed back – whoa!]. Indeed, it’s these inconsistencies that highlight Cat Girl’s problems in not knowing if it wants to be a full-on horror or a contemporary thriller. 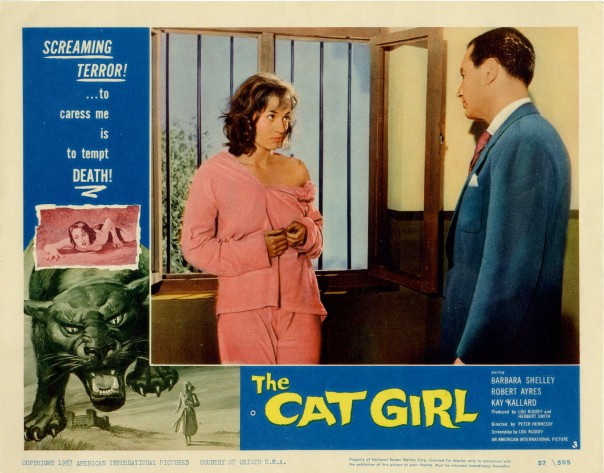 Shaughnessy and his cast and crew do their best with the minimal sets (all filmed at the old Beaconsfield Studios, except for the ending) and with Russof’s mixed-bag of a script, which is littered with some unintentionally hilarious dialogue like: ‘You’re not incurably insane, just a little run down’ and ‘When I die I want to be wrapped in velvet’. But while Cat Girl cannot hide its B-movie trappings, Shaughnessy does come up with three memorable scenes.

The first is when Shelley’s Leonora watches the leopard attack her unfaithful husband. The look on Shelley’s face is a mix of savagery and ecstasy (it is one of the film’s most disquieting moments). The second is when Leonora, locked up in the sanatorium, paces her room like big cat in a cage. The editing here is expressionistic and reminiscent of 1932’s Island of Lost Souls. The third is the film’s climax (inspired by a key scene in Cat People), in which Leonora gets her [metaphorical] claws out again to stalk Dorothy through the deserted East London streets [on location thankfully]. Here, Shaughnessy uses lots of shadows and close-ups of high heels to give his big ending a suitably noir-ish feel. While it’s shame this wasn’t carried throughout the film, we do have Shelley’s fine performance to savour. She is frankly the best thing in this movie. You go girl! 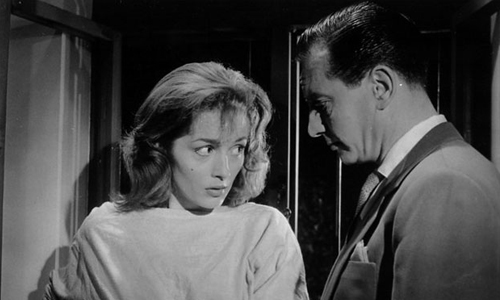