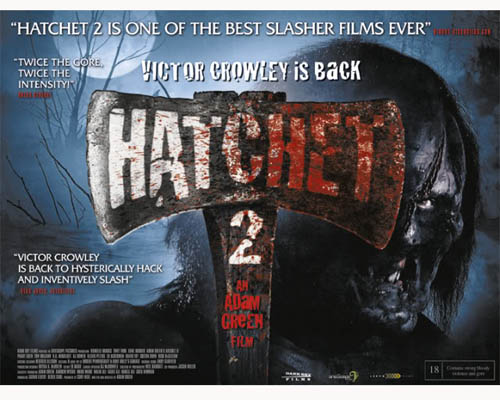 When it comes to tongue-in-cheek horror comedy few films can surpass 1985’s Return of the Living Dead whose comic script, great special effects, neat soundtrack and solid acting really sets the benchmark for these kind of films (as far as I’m concerned, that is). 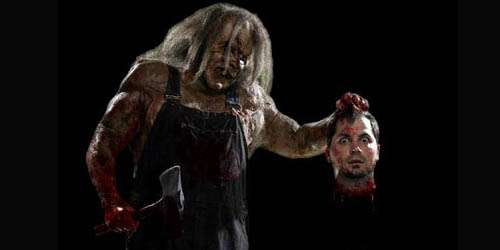 Adam Green, Horror-dom’s favourite poster boy, made his name back in 2006 with his old-school serial killer horror Hatchet. Since then, he’s stretched his directorial wings with the classy thriller Spiral and the taunt survival chiller Frozen [reviewed here]. But he’s always promised his fans more Hatchet sequels, beginning with this one from 2010.

It doesn’t matter if you haven’t seen the original, but it does help to know a little about Friday the 13th, as this film is a pure homage to the horror franchise and its leading man, Jason Voorhees. Here, Green has fashioned his own horror icon-in-the-making in the form of Victor Crowley: a deformed, indestructible, serial killer who haunts a cursed Louisiana bayou and looks like a cross between Troma’s Toxic Avenger, The Elephant Man, and Robert De Niro’s Frankenstein monster. 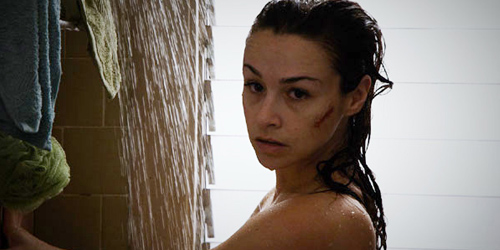 The sequel follows directly from the first with heroine Marybeth (Danielle Harris) escaping Crowley’s clutches then returning to the dreaded swamp with a pack of hunters in tow, headed by Tony Todd’s flamboyant Reverend Zombie, to avenge the deaths of her father and brother. Only problem is, Crowley (again played by Kane Hodder, aka Jason Voorhees VII-X) also has a score to settle: the deaths of the three boys responsible for his fiery death.

You have to wait 53-minutes of back-story and highlights from the original before you get to your first fresh kill, but once Crowley starts butchering, you’ll find yourself whooping in delight as the body count rises. The death scenes are gory; inventive and well executed with all manner of tools including shovels, boat motor blades, giant double chainsaw and a sander – in addition to Crowley’s trusty hatchet – being used to decimate the cast.

Forget the cardboard story and mostly lame acting (Harris shouts through her role, while Todd seems to be invoking True Blood’s Lafayette with his performance); it’s the jokey violence and bloody pulp of an ending that makes Hatchet II a winner for me. Does it reach the lofty heights of my favourite horror comedy? ‘Fraid not, but it’s still one to enjoy with your fellow horror fiends over a few beers.

Just one question, does anyone know what a ‘Voodoo Fluffer’ is?