← Dream Home (2010) | This stomach churning Hong Kong horror makes gazumping the deadliest game to play
Buried (2010 ) | Get up close and claustrophobic with Ryan Reynolds in a tense and gripping thriller? →

When Island of Death director Nico Mastorakis once asked a festival audience member, ‘What made you want to see this movie?’, he got a telling reply: ‘Because it was banned’. And that’s exactly the reason why I first sought out what has become Greek exploitation’s most famous export.

The movie that the censors don’t want you to see!
Originally on the British censors video nasty hit list in the 1980s for its depictions of bestiality and graphic violence, Island of Death ended up having some 20-minutes of footage excised by the BBFC. When it was eventually passed uncut and released on DVD in 2011 by Arrow Video, video nasty aficionados finally got the chance a chance to see the film as the director shot it. Now, the infamous lurid shocker has been given an exclusive 2k restoration by Arrow. 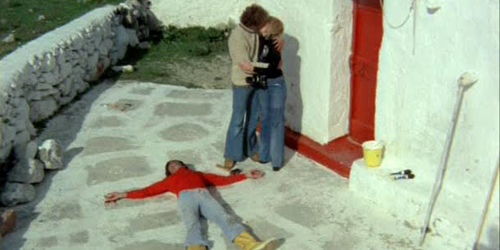 The lucky ones simply got their brains blown out!
Shot on the cheap over 18-days during the off-season on the Greek island of Mykonos, with a group of English-speaking non-actors in tow (some of whom also appeared in that other Mediterranean mess, The Devil’s Men, which was shot at the same time, but had star names like Peter Cushing and Donald Pleasance attached to it), this psycho-sexual thriller follows a psychopathic British couple, Christopher and Celia, as they attempt to cleanse the island of immorality and perversion by killing anyone (mainly homosexuals, middle aged nymphomaniacs and hippies) who don’t meet their crazed ideas of purity. As an added kink, the couple photograph their murder spree that includes crucifixion, poisoning with paint, hanging from a plane wing, and being hacked to death with a mighty sword of justice.

Although the film boasts depraved acts of sex and rape, both human and animal, the results are little more than what you’d expect from a sex comedy, while the gore looks cartoon-like. The travelogue-like cinematography, which perfectly captures Mykonos’ picture-postcard scenery, and the incongruous folksy soundtrack only serve to make this film campier than the director intended.

THE BLU-RAY ARROW VIDEO RELEASE
Arrow Video‘s director-approved dual format (Blu-ray/DVD) edition features not only a new 2K restoration of the film, but over seven hours of bonus content, including the making-of featurette, Exploring Island of Death (which drags on a bit), and a location featurette, Return to Island of Death (with Mastorakis playing tour guide. This one’s a winner for me).

Also included is an archive interview with the director, alternative newly-created opening titles, and five original tracks from the soundtrack, including the catchy theme song. A four-part documentary charting Mastorakis’ filmmaking career and trailer reel (featuring some real stinkers) make up the Blu-ray release extras, plus a reversible sleeve featuring artwork by Graham Humphreys and a collector’s booklet.

← Dream Home (2010) | This stomach churning Hong Kong horror makes gazumping the deadliest game to play
Buried (2010 ) | Get up close and claustrophobic with Ryan Reynolds in a tense and gripping thriller? →