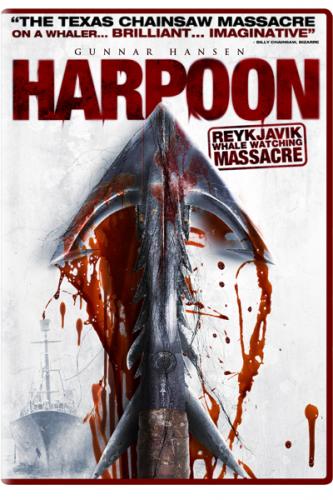 Ever been part of a tour group with a bunch of strangers in some remote foreign clime and wondered; ‘If we got into serious trouble, would we all work together to protect each other?’ Well that’s the premise of 2010’s Harpoon: The Reykjavik Whale Watching Massacre, an Icelandic slasher that’s definitely way better than its exploitive title might suggest.

Texas Chain Saw‘s original Leatherface, the late-Gunnar Hansen (who died in November 2015, aged 68), plays the captain in charge of a whale watching boat, Poseidon, that sets out on a three-hour tour with handful of eco-tourists: amongst them is a German night-clubber, who smashes her knee while boarding the boat; a Japanese translator, who is struggling to please a misogynist businessman and his loyal wife; and a quiet African-American man. 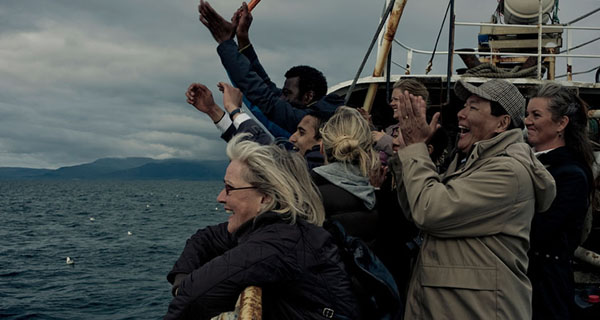 But this is no Gilligan’s Island adventure, as events soon take a dark path. While coaxing a drunk French Arab down from climbing the ship’s mast, the captain becomes impaled by a stray harpoon. Instead of helping, the Poseidon’s repellent first mate then jumps ship, leaving the tourists to fend for themselves. Hailing down a small craft, the tourists think they are heading back to the harbour, but they are far from safe. On boarding an old whaling boat, the small group are soon fleeing for their lives, as they become blood sport for a family of revenge seeking whale hunters.

Scary, exciting and with characters that you really can believe in, this is a slasher for grown-ups. While it may conjure up memories of Hostel and its ilk, there is so much more here, thanks mainly to the screenplay (from Sjón Sigurdsson, the lyricist for Lars von Trier’s Dancer in the Dark), which is a blackly comic social commentary on commerce, race and morality, and Júliús Kemp’s careful direction, which stays on the right side of gore – thrilling, but not eye-wincing.

From the inventive opening credits to the punk-rock remix of Bjørk’s It’s Oh So Quiet over the closing credits, this chilly Icelandic offering is a carefully crafted, intelligent addition to the horror genre. As for who survives, well I was genuinely surprised… but I loved it.