Having spent six years dealing with all manner of freaks and psychos as Dr Sean McNamara in Ryan Murphy’s dark drama Nip/Tuck, Dylan Walsh made a suitable choice to step into the shoes of The Stepfather, which originally belonged to Terry O’Quinn back in 1987.

This 2009 remake of the cult classic sees Walsh play the deeply disturbed title character who sets up home with fatherless families, then slaughters them when they inevitably disappoint him. Now calling himself David Harris, Dylan’s killer has charmed his way into the life of divorcée Susan (Sela Ward) and her family. When Susan’s oldest son Michael (Penn Badgley) returns home after a spell at a military school, David uses every trick in the book to get on the bad boy’s good side so that he can marry Susan and start playing happy families.

But David slips up during a bonding session, causing Michael to become suspicious of his soon-to-be-step dad’s seemingly perfect manner. When Michael’s dad and Susan’s sister begin to check up on David’s background, the tension mounts as David’s dark side manifests – leading to a gripping climax. 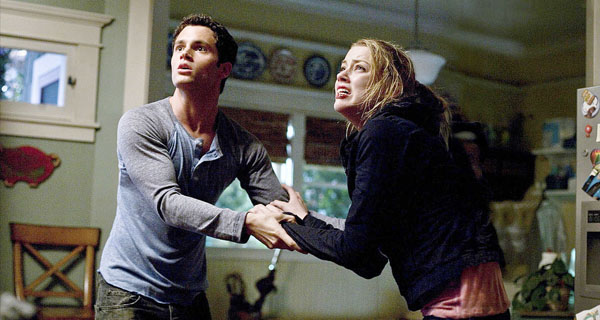 This good-looking production is actually better than I thought. Walsh is effectively creepy – David’s conservative approach to raising a family is truly scary (just think right-wing Republican) – and Badgley shows he’s more than a pretty boy (although that’s no bad thing), especially when it soon becomes a fight to the finish as moody Michael tries to unmask David for the killer he really is.

A UK R2 DVD was released back in 2010. But why it was called the Extreme Director’s Cut is a mystery as Nelson McCormick, who also directed the Prom Night remake, and his writer, The Covenant‘s JS Cardone, have gone for Hitchcockian suspense over gore, which is actually a fright for sore eyes.

You can catch The Stepfather on The Horror Channel tonight (Wednesday 6 April) at 9pm.