Tired of his bourgeois wife and materialistic lifestyle, restless TV executive Ferdinand (Jean-Paul Belmondo) escapes to the French Riveria with his former girlfriend-Marianne (Anna Karina), who is being hunted by some gun-running gangsters.

But their carefree new life is quickly interrupted by their pursuers, and a man called Fred (Dirk Sanders), who may or may not be Marianne’s brother…

Belmondo scored a BAFTA nod for his performance in Godard’s anarchic tale about a couple unable to escape fate no matter how far they flee.  Made off the cuff, but with meticulous attention, this free-wheeling road movie certainly displays the director’s love for American pulp fiction and pop culture, while also delivering an allegorical view of the Vietnam war.

Godard regular Raoul Coutard provides the beautifully mounted visuals, that evoke pop art and comics, while a cameo from American cult director Samuel Fuller serves to reminds us that what we are experiencing is not a film as such but ‘an attempt at cinema’. His theory that ‘Film is like a battleground. Love. Hate. Action. Violence. Death. In one word… emotion!’ perfectly sums up Godard’s fascinating, and somewhat frustrating, revolutionary post-modern experiment. 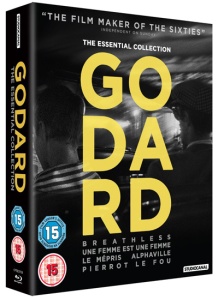