Alan Marlowe (Malcolm Stoddard) and his TV presenter wife Kate (Cyd Hayman) lead an idyllic life in their country cottage with their four children. When a mysterious pregnant woman (Angela Pleasance) vanishes after giving birth to a baby girl in their home, Kate and Alan decide to raise the girl as their own, naming her Bonnie. But tragedy soon strikes their own brood: their infant son Matthew is found dead in its cot, son Davy drowns in a lake, and Sam dies after fall in the barn.

When Alan blames Bonnie, Kate cannot bear the thought her beloved daughter could be responsible. But the seemingly angelic child with the snow white hair and blue eyes is, in fact, a human cuckoo, who refuses to share her ‘nest’ with anyone else… which doesn’t bode well for sister Lucy or the fetus growing inside Kate…

This 1980-horror thriller was based on Bernard Taylor’s 1976 debut novel of the same name, which rode the wave of Bad Seeds reads, including The Exorcist, The Other and Rosemary’s Baby, that came out during the era, and like them, ended up transferring to the big screen.

The papers of the day called the novel ‘a shocker’ and ‘a splendidly readable and creepy story’ and its premise was indeed inventive. But in the hands of screenwriter Olaf Pooley (who also contributed to the mess that was 1985’s Lifeforce) and TV drama director Gabrielle Beaumont (who’d do much better with Hill Street Blues later on), the movie adaptation is a flaccid affair, with little in the way of suspense, atmosphere or imagination, particularly the death scenes, which all happen off-screen. There are certainly no memorable Omen-esque set pieces on offer here, while the scenes of sun-drenched picnics and country walks looks more like something out of Comic Strip Presents… Five Go Mad in Dorset. 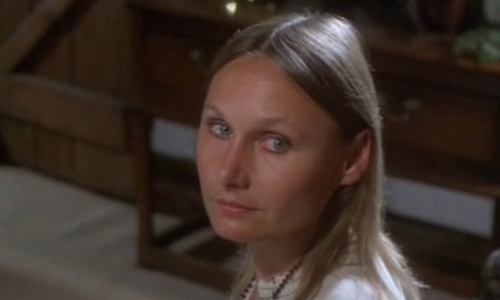 Angela Pleasance is the only star name amongst the cast, and she certainly elicits a genuinely chill when she’s on screen. But she only book ends the film, which concludes with the devastated Alan spotting her at London’s Serpentine Lake befriending another family. Fans of Hammer’s TV 1980s series might like to know that Wilhelmina Green (one of the two actresses who play Bonnie) was one of Diana Dors’ brood in the episode, The Children of the Moon.

* This review first appeared on The Spooky Isles