Heading into black comedy horror territory, Hammer screenwriter Jimmy Sangster made his directorial debut with 1970’s The Horror of Frankenstein, a revisionist remake of the studio’s stylish 1957 Gothic horror classic The Curse of Frankenstein  – which he also wrote. But it’s quite the disappointment – even to die-hard fans. 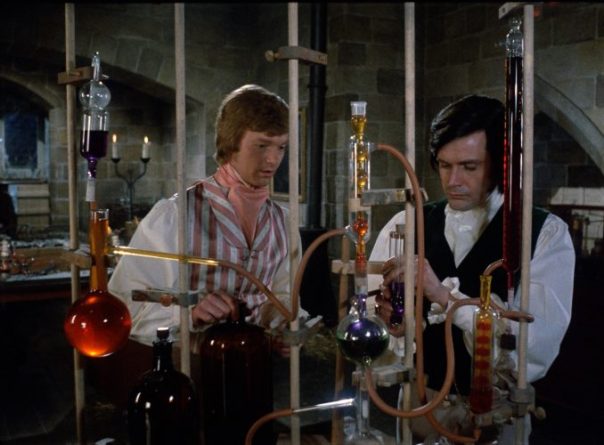 With Hammer eyeing up a hipper, younger crowd, Taste the Blood of Dracula’s Ralph Bates takes over the title role of the monster-making Baron from Peter Cushing (who had played it four times) and he portrays him as a psychopathic serial killer and arrogant womanising misogynist who prefers tight breeches to show off his ‘average’ manhood.

Taking its narrative cue from Curse, the Gothic horror parody finds Bates knocking off his dad, claiming his Baronic title and fortune, and heading off to medical school. But, after getting the Dean’s daughter pregnant, he returns to the family castle, where he sets up shop with fellow medical student, Wilhelm Kassner (Graham James, wearing a hideous pink cravat), to create human life using a big chart labelled with numbered body parts.

Once assembled and activated, the new Baron’s creature – played by a pec flexing Dave Prowse (aka bodyguard Julian in A Clockwork Orange and the strongman in Vampire Circus) – starts killing all and sundry for no apparent reason – altough the indignity of having to wear an S&M collar, nappy and red lipstick applied stitch marks could be justifiable.

The studio-bound exteriors (except for a shot of Austria’s Hohenwerfen Castle, and a bridge and churchyard scene shot in North Mymms, Hertfordshire), re-used sets (the castle stonework looks like wallpaper), and ‘toilet humour’ does Sangster a real disservice (something he later admitted); but this lacklustre affair is worth watching for the Hammer glamour on display.

The Vampire Lovers‘ Kate O’Mara, sporting a dodgy accent that’s West Country by way of the Emerald Isle, vamps it up as the ‘accommodating’ chambermaid Alys, while statuesque Veronica Carlson (who was so good in 1969’s Frankenstein Must Be Destroyed) tries her best as needy professor’s daughter, Elizabeth, whose designs on the Baron get short shrift – probably on account of her Heidi hair-do of greasy links of bratwurst.

Both O’Mara and Carlson add some real Hammer glamour to the proceedings, and on a personal note, it has been great to have met them on the convention circuit. Sadly, Kate O’Mara passed away on 30 March 2015, aged 74, from ovarian cancer. Veronica, meanwhile, has become quite the artist and lives with her family in the US.

Dennis Price (now there’s someone I would have loved to have met) and Joan Rice (in her last film role) steal the show as a husband and wife pair of body snatchers, while Jon Finch is totally wasted as the Baron’s former childhood friend turned local copper. He did, however, find his stride in Roman Polanski’s The Tragedy of Macbeth the following year, and Robert Fuest’s The Final Programme in 1973.

Carry on… Young Frankenstein this is not! But it should have been!

The Horror of Frankenstein gets its Blu-ray UK debut (on Doubleplay from 29 January 2018) courtesy of Studiocanal featuring a brand new HD restoration (which only serves to accentuate the ‘wallpaper’ scenery, plastic forest trees and garish costumes).

It does, however, include the featurette, Gallows Humour: Inside The Horror of Frankenstein, which includes some interesting comments from Veronica Carlson about her time on the production, as well as some interesting production trivia from a handful of Hammer experts.