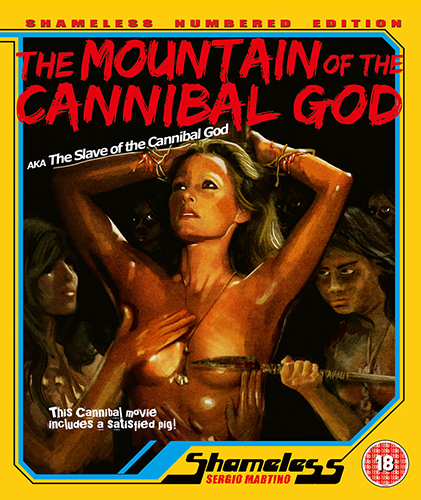 From Shameless in the UK comes the 2k restoration release of Sergio Martino’s 1978 Italian horror The Mountain of the Cannibal God (minus the gratuitous animal cruelty) on Blu-ray and DVD.

Ursula Andress braves tarantulas, alligators, anacondas and treacherous terrain as she goes in search of her missing scientist husband, Henry, on a ‘wild and uncontaminated’ island in New Guinea.

Enlisting the services of Stacey Keach’s professor Edward Foster and jungle explorer Manolo (Claudio Cassinelli), Susan (Andress) and her brother Arthur (Antonio Marsina) set their sights on the mountain of Ra Ra Me, where Henry’s clandestine expedition was headed. But everyone have their own private reasons for reaching this mystical destination… and not everyone is going to survive the ‘orgiastic pandemonium’ that ensues…

Also known as La montagna del dio cannibale (in Italy), Slave of the Cannibal God (in the US) and Prisoner of the Cannibal God (in the UK), Martino’s exploitation flick was banned in the UK as a ‘video nasty’ until 2001 for its violent imagery. Shameless have now reinstated the long-missing original dramatic gore, but has wisely chosen to ‘soften’ the animal suffering visuals which were patently inserted, completely out of context, to cater for commercial stipulations of the day. However, that bestiality scene involving a ‘disinterested’ pig remains intact!

Frankly, I think this rebuild makes for much more suspenseful jungle adventure (like King Solomon’s MInes meets Emmanuelle), while Giancarlo Ferrando’s cinematography of the jungle and its wildlife, and the cave locations (all shot in Sri Lanka,) really shine in this restoration. The camera also loves Andress, who looks flawless despite her many ordeals, which include climbing a genuinely dangerous waterfall and being turned into a living goddess coated in honey. The music score, by Guido and Maurizo de Angelis, is also one I could happily listen to in its own right. My only niggle is the film’s unflattering portrayal of indigenous culture (but that is something that’s problematic of many Mondo-style exploitation flicks of the era).

Martino has fully supported Shameless’ efforts not to ‘pander to exploitative and unnecessary violence against animals’, and the director explains that in detail in the extras that are included in this release.