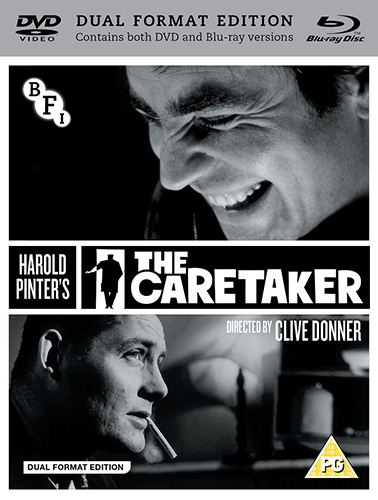 The Caretaker remains one of Harold Pinter’s most famous works. This study of shared illusion, tragic dispossession and the fraternal bond of unspoken love, combines the magic of Pinter’s dialogue with some mesmerising performances from Alan Bates, Donald Pleasence and Robert Shaw into a spellbinding film, sensitively directed by Clive Donner and shot by Nicolas Roeg, which is now out in a dual format release from the BFI, presented in a newly-restored print and with a host of extras (check them out at the end of this post).

Here, guest reviewer Ali Pye gives her low down on Pinter, the play, the film and the BFI release…

Harold Pinter was in the right place at the wrong time. A schoolboy witness to the World War II carpet-bombing of London’s East End, his response to such violence placed him as one of the angrier young men on the writing spectrum. By the late 1950’s he was well on the way to blowing the bloody doors off.

The Caretaker was his first commercial theatrical success. Burrowing upwards through inner city post-war debris like a weed, spare, sparse, resilient, it debuted in April 1960 and was feted first off the Charing Cross Road later transferring to Broadway. Regardless however of such glittering cosmopolitan acclaim, the blunt 3 hander set in a single cluttered room remained very much grounded among the bricks and bric-a-brac of down-at-heel Hackney. It was in this borough, where Pinter was born and schooled, that Clive Donner assembled an artist/actor collective and camera crew in late 1962, filming during the coldest winter on record.

Underwritten with donations from British stars of stage and screen, the project was an early GoFundMe fifty years before the concept existed. Each benefactor supplied £1000. Twice that could get you a fourth floor bedsit in Islington within thieving distance of the library. There is little imagination required to explain the empathy behind Peter Sellers’ backing, solitary child of a nomadic theatre family whose shallow roots had dug into the similarly bleak soil of East Finchley. Noel Coward and Elizabeth Taylor’s subscriptions suggest some less personal forces at work.

Shot entirely on location around Clapton, the outer parameters of The Caretaker are the distance a man could trudge from Mare Street in ill-fitting shoes. And no further. Despite the freedoms allowed by film at a time when it was not possible to get a van on stage at the Arts Club, even if had Pinter written one in, the piece remains chillingly claustrophobic. Three men, most usually in dual combinations and head-on, shuffle about the confined space of the upstairs bolt hole arguing status, standing, sheds, Sidcup and seagrass, never more than a few feet apart.

It is a tale full of sound and fury. And in part seemingly told by a madman.

One bitter winter evening, the homeless and dispossessed Davis is saved from a good kicking by a taciturn stranger, Aston and taken into his home. Initially disconcerted by the kindness, the tramp sets about negotiating residency in the rambling, ramshackle property in which, if care is taken, he may find permanent refuge. The garrulous and distracting Mick, Aston’s brother appears to offer alternative terms, although it’s a word game with much the same end.

Amid the chaotic and haphazardly piled junk hoarded by Aston, an ice-cold stove dominates the room. Even if the window were not open, at times with the snow flurrying down outside, diffusing the stench from the unwashed vagrant, there is no possibility of warmth or comfort.

“It’s not connected.” Explains Aston when pressed for a cup of tea.

A lack of connection pervades. Very much more than the cooker appears isolated and without purpose. Aston has entirely withdrawn following a non-specific institutionalisation. The blistering details of his shock therapy are recalled in an uncomfortably invasive single shot. Actor Robert Shaw’s eyelids twitch as he stumbles over the violation at the hospital somewhere “outside London”. For a film in which site-specific references come along more regularly than the #30 bus (via Highbury Corner), with journeys “down the Essex Road to Dalston Junction” taking on a mythic quality and Micks’ knowledge of hump backed bridges on the A2 almost encyclopaedic, there is no safe travelling outside the room resulting in terminus nor arrival nor completion. An offer to drive to Sidcup and collect finally ”the papers” that underpin Davis’ inconstant grasp of identity sees Mick’s van swerving pointlessly around a circular layby, depositing the old man back at the bench from which he started out some half a minute earlier.

Where the film can free itself from the immediate physical confines of the attic, Donner does so with a delicate poignancy. On the page the brothers share only two brief scenes together tight amid clutter under the steeple eaves. On the screen they are granted a soundless and affecting moment of reflection above a frozen pond in a winter garden, seen from a distance, indistinct, and tellingly through glass, the sacking-draped top storey window serving to emphasise we look through a camera lens and not straight at a stage.

The music too suggests an inhospitable landscape. Ron Grainer’s disconcerting soundtrack is high pitched scratching, screeching and oddly resonant metallic drips into a tin bucket tied to the ceiling. An echo of the bitter cold outside and in, there is barely a scene not underscored by grating electronic slides as if thin ice were cracking underfoot.

Davis’ obsession with bags and boots, the detritus of a wandering street life calls to mind, inevitably, other tramps from drama of the period. But the nifty pace of Donner’s film, despite long low shots across bedsteads and pipes and years’ worth of newspapers bound in carefully knotted string, ensures we never focus merely on the hiatus. This is much more than a wait between pauses. Donner’s low angles, the splintered lighting and unflinching close-ups are suggestive of a thriller.

Of the three actors, Pleasence, Bates and Shaw, the two former had developed their characters in The Arts Theatre in 1960 and taken them right across the Atlantic. The film-set off Lower Clapton Road must have felt like a homecoming. Pleasence, at forty-four some thirty years younger than the vagrant he portrays, is bundled in patchwork layers of castoffs and coats. Davis resembles nothing more than a tatterdemalion onion, the peeling of which may lead to a concrete identity thus saving the bother of schlepping to Sidcup.

Fear of the foreign, fear of the other and fear of each other all collide in The Caretaker. The film is an unsettling watch catching an unsettled time. The 60’s were not yet swinging but the oddly visionary consortium backing the production, Peter Hall and Richard Burton by no means the least likely pairing, suggest a pendulum movement starting to oscillate. Grainer, the composer of the shard-shattering and unsettling falls was already tinkering with the theme for a forthcoming BBC series. The pilot show in autumn 1963 would feature another ungrounded senior gentleman of dubious provenance and a box smaller on the outside.

Shuffling through freezing early dusk, passing the time that would have passed anyway, Davis is illuminated in the doorway of the Hackney Empire theatre, a welcome blaze of light in a feature lit for the best part by a single bulb on a wire. The back bar where some years earlier an out of work writer named Milligan had encountered a barely in work radio actor named Sellers and comedy history began a gestation.

The Caretaker formed in this crucible, penned by the master of the theatre of menace, part financed by a Goon, scored by the genius who could hear the sound of a TARDIS barrelling through time. Director Donner’s brief was to run with it. He didn’t go far. Balls Pond Road was the outer limit.

This glorious restoration reminds us that expansion need not be dilution. In the hands of an inventive creative (and there were enough involved as a stills photo of Noel Coward hemmed between lighting gaffers on the set sofa bed during production reminds us) a piece so static and rooted and constrained can soar with effortless flight well beyond the derelict geography. An early and brilliant example of thinking outside the box (room).

THE BFI DUAL FORMAT RELEASE
• Newly restored from the original camera negative by the BFI, and presented here in High Definition and Standard Definition
• Audio commentary by actor Alan Bates, director Clive Donner and producer Michael Birkett (2002)
• Introduction by critic and author Michael Billington (2002, 6 mins)
• On Location with The Caretaker (1962, 4 mins): an extract from the TV series This Week in Britain
• The Caretaker: From Play Into Film (2002, 17 mins):a video essay by Michael Billington, using materials donated by Clive Donner to the BFI National Archive
• US opening titles (1963, 2 mins): the opening title sequence from the US where the film was released as The Guest
• Last To Go (1969, 6 mins): the last of five animated shorts directed by Gerald Potterton for Pinter People, voiced by Harold Pinter and Donald Pleasence
• Harold Pinter’s Play Discussed by Clive Donner (1973, 47 mins): the BAFTA-winning director discusses his adaptation of The Caretaker
Stills Gallery
• Ilustrated booklet with new essay by critic and author Amy Simmons, writing by Michael Billington and Clive Donner and full film credits (first pressing only)