Murderous Passions : The Delirious Cinema of Jesús Franco | Stephen Thrower serves up the definitive tribute to the cult film legend

OK! So I’ve just got my hands on this exhaustive, obsessive labour of love from Nightmare USA author Stephen Thrower and co-writer Julian Grainger, which has been sumptuously produced by Strange Attractor, and it’s bloody fantastic!

Jesús ‘Jess’ Franco is an iconic figure in world cinema. Directing more than 180 films in a career spanning six decades, the Spanish filmmaker is one of the most prolific directors of all time and winner of a Lifetime Achievement prize at the 2009 Spanish Goya Film Awards. Yet his work frequently met with censorship resistance and was often despised by critics. Franco’s taste for the sexy and horrific, his lifelong obsession with the Marquis De Sade and his roving hand-held camera style birthed a whole new strain of outlandish sado-erotica.

Stephen Thrower has devoted five years to examining each and every Franco film. This book – the first in a two-volume set – delves into the first half of Franco’s career: from his avant-garde comedy Tenemos 18 años in 1959, through the groundbreaking surgical horror story The Awful Dr. Orlof and the art-horror masterpiece Necronomicon, to his grisly psycho-killer opus Exorcism in 1974.

With the guidance of critic and researcher Julian Grainger, who contributes a number of excellent articles, Thrower uncovers previously unknown facts within Franco’s filmography, on its casts, crews and production histories, to provide a concise and definitive assessment of the iconic director’s labyrinthine film universe.

The 432-page book, which has a Forward by Franco regular Monica Swinn and 32 pages in colour, is available in two editions from: a signed and numbered Special Edition, imited to 300 copies, in a cloth, foil blocked cover with inserted colour plate, plus a postcard set and a limited 7″ vinyl disc of Franco music (containing three tracks from La Comtesse Perverse and Le Journal Intime dune Nymphomane by Roger Davy), and a signed Standard Edition, with postcard set. 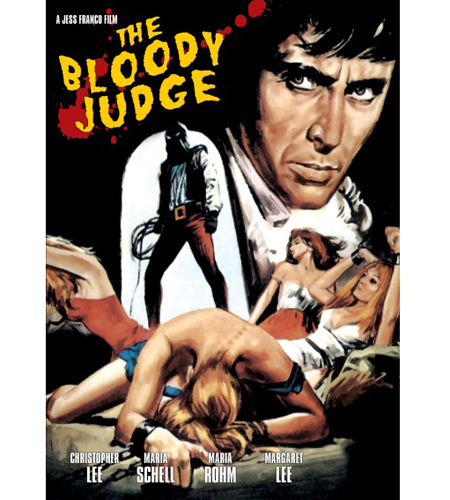 HORROR WILL HOLD YOU HELPLESS!
In Jesús Franco’s 1969 Euro-horror Christopher Lee (in a powdered wig) stars as the real-life 17th-century Lord Chief Justice of England, Judge Jeffreys, dramatised here as a depraved character who condemns women as witches to further his political and sexual needs. Catching his lusty eye is Maria Rohm‘s buxom wench Charity, who is forced to submit to Jeffreys’ desires in order to stay alive. But the judge had better watch out, as William of Orange is poised to end his sadistic reign.

NOT THE WITCHFINDER GENERAL, AGAIN!
The Bloody Judge (aka Night of the Blood Monster) is one of two films that tried to emulate Michael Reeves’ superior 1968 British period drama Witchfinder General. The first, Mark of the Devil, was a sadistic German-made sex movie that exploited its screen violence with sick bags being handed out to cinema patrons. Franco’s film, however, is a much more restrained affair, with Christopher Lee in fine form as the dissolute Jeffreys, while cult legend Howard Vernon plays a genuinely sinister hooded executioner (obviously modelled on Boris Karloff’s Mord in 1939’s Tower of London). It’s also so darn gorgeous to look at that you can forgive the film-makers for not using any real English locations.

THE UK DVD RELEASE
The 2013 Mediumrare Entertainment UK DVD release of The Bloody Judge contains a lovely print of the film (sadly there’s no sign of the nudie scenes that were supposed to have been shot after Lee finished filming his scenes). Extras include interviews with Franco and Lee, deleted scenes, poster and stills gallery, trailer. 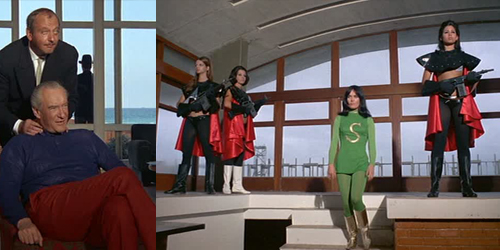 BEHIND THE VENEER
Inspired by the comic strip capers of 1966′s Modesty Blaise and 1968′s Barbarella, Franco and producer Harry Alan Towers first gave Sax Rohmer’s female Fu Manchu, Sumuru, a kinky makeover in 1967’s The Million Eyes of Sumuru. This colourful campy 1969 sequel isn’t in their league, but it does make great use of Rio’s Sugarloaf mountain (and gave Sanders and co an exotic paid holiday), while the cool production design and sexy sci-fi clobber are very much of the era. There’s also quite a bit of flesh on show and a large chunk of running time devoted to Rio’s carnival. Eaton retired from acting after making this film, while Sanders, who was already in poor health, would take his own life just three years later, in 1972.

THE RELEASE
Mediumrare Entertainment offers a fine print on this UK DVD release, with some interesting extras including a 2004 documentary featuring director Franco, who sums up his films as: ‘It’s not art, but it makes you happy.’

THE VERDICT
A might see. This is strictly for Jesus Franco completists.