Revenge (1971) | James Booth and Joan Collins are out for blood in the sensational X-rated British shocker!

If you look in the basement… be prepared to SCREAM!
Following the murder of his young daughter Jenny, publican Jim Radford (James Booth) is persuaded by his best mate Harry (Ray Barratt) to hunt down the suspected child killer who has just been freed by the police and extract a confession from him.

Aided by his 18-year-old son Lee (Tom Marshall), Jim and Harry abduct loner Seely (Kenneth Griffith), then lock him up in the pub’s cellar where they beat him to a pulp under the watchful eye of Jim’s wife Carol (Joan Collins). But keeping their quarry a secret from the police and the pub’s punters while they decide what to do next puts their loyalties to the test… 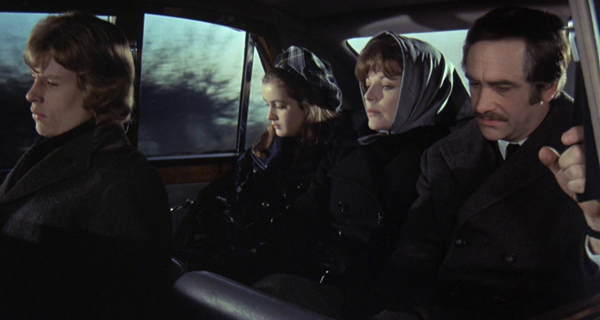 Welcome to the Inn of the Frightened People
With tight direction from Sidney Hayers (Circus of Horrors, Night of the Eagle) and a script bristling with tension and melodrama from The Saint screenwriter John Kruse, Revenge was one of the most lurid British thrillers to come out of the 1970s, and quite the departure for producer Peter Rogers, who was better known for the Carry On films.

But there’s quite the carry-on happening down at The Crown pub where James Booth’s landlord Ray must decide the fate of the man he’s got tied up cellar – is he really responsible for his daughter’s death or has he been falsely accused? While Kruse’s script touches on the very emotive subject of child killers and sex offenders that’s still very relevant today, it concerns itself more about matters of conscience. For Ray, it’s the nagging thought that he may have gone to far; for Lee, it’s being unable to perform for girlfriend Rose (Sinéad Cusack), and for Carol, it’s all about looking the other way.

Working entirely on location and shooting in vivid Eastmancolor, Hayers (coming directly off TV’s The Avengers) and cinematographer Ken Hodges (The Shuttered Room) make excellent use of the pub’s nooks and crannies and surrounding suburban streets (in Little Marlow in Buckinghamshire), which lend the proceedings a suitably claustrophobic air – all the better for the ensuring drama to heat up as Ray, Carol and Lee try to cover their tracks, and tensions start to fray, climaxing (no pun intended) in the film’s most sordid scene in which Lee engages in rough sex with step-mum Carol while a bound and gagged Seely looks on through shattered glasses.

The abduction of a suspected child killer by a grieving dad and his mates was also used as the premise of the shocking 2013 Israeli film Big Bad Wolves. But that relied on scenes of extreme violence to tell its politicised vigilante story. Now, Revenge may have been regarded as one of the most unsavoury British thrillers of the 1970s, but it’s pretty tame by today’s standards, and could easily be a storyline in one of those ITV real-life dramas or a British soap – after all The Queen Vic’s cellar in EastEnders was the setting of Dirty Den’s ultimate demise. And I must admit that watching Joan Collins as landlady Carol in Revenge, I couldn’t help but wonder what she’d be like taking over The Vic now that Babs Windsor’s Peggy Mitchell has said her final goodbyes. Maybe she should be speaking to her agent? 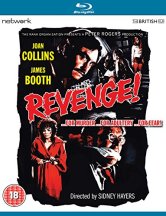 THE NETWORK RELEASE
Revenge is featured in a brand-new High Definition transfer from the original film elements in its original theatrical aspect ratio on Blu-ray and DVD, as part of Network’s The British Film collection.

The extras includes restored original theatrical trailer (which thankfully doesn’t have any spoilers), an image gallery (with lots of modelling shots of Joan Collins), a script (in pdf) and a collector’s booklet with articles by Professor Neil Sinyard.

The Town That Dreaded Sundown (1976) | The Texarkana Phantom Killer strikes again – on Blu-ray! 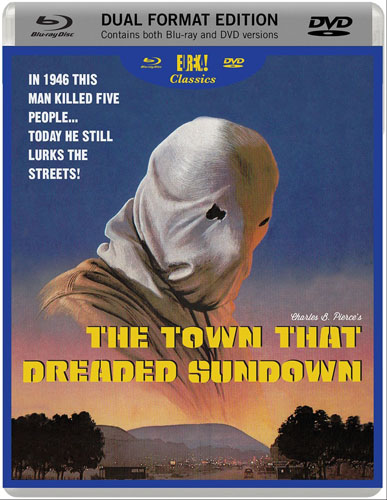 If you’ve seen the 2014 remake, well here’s your chance to see the original 1976 drive-in crime thriller which shocked audiences on it’s release, preceded the slasher phenomenon, and included a castaway from Gilligan’s Island amongst its victims, as Eureka! Entertainment has released a brand new HD transfer of the legendary film on Blu-ray and DVD.

Starring Andrew Prine and Ben Johnson, and directed by Charles B Pierce, The Town That Dreaded Sundown is based on one of America’s most baffling murder cases. In the spring of 1946, the small town of Texarkana is terrorised by a mysterious assailant targeting young lovers in parked cars. Baffled local deputy Norman Ramsey (Andrew Prine) then calls in Texas Ranger JD Morales (Ben Johnson) to help him track down what the press call, The Phantom Killer, before he can strike again… 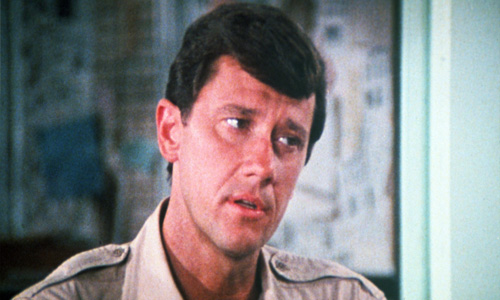 This American International Pictures (AIP) release has garnered quite a cult reputation over the years. Director Pierce was a former set decorator (he worked on AIP’s Coffy) before directing his first feature, the seminal faux Bigfoot documentary The Legend of Boggy Creek.

On the back of the success of Boggy Creek, Pierce again used documentary elements (and the same narrator) for his fictionalised thriller. He also added in some comic elements (including having himself play a bumbling cop), which ended up making the film’s violence all the more shocking: especially the now infamous death by trombone and the terrifying cornfield escape by Dawn Wells (aka Gilligan’s Island’s Mary Ann), who plays real-life victim Helen Reed. 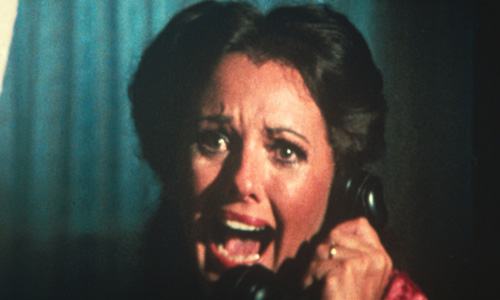 The Eureka! Entertainment Dual Format UK release includes a brand new 1080p high-definition transfer and progressive DVD encode, presented in the film’s original 2.35:1 aspect ratio, and this is a huge improvement on the prints that crop up on The Horror Channel in the UK, and also serve to really highlight the colourful Panavision cinematography.

The special features include trailers for the original and the 2014 remake; interviews with Andrew Prine, Dawn Wells, and director of photography James Roberson; a fascinating featurette Small Town Lawman about Prine; and an audio commentary with historians Justin Beaham and Jim Presley. In the US, the film is released through Shout! Factory with the same extras, but also includes Pierce’s follow-up, The Evictors (1979).

The Other (1972) | Robert Mulligan’s Depression-era set psychological chiller is an unsetting, underrated original

When does the game stop and the terror begin?
It is the summer of 1935 on the Perry farmstead in rural Connecticut, where 10-year-old Niles (Chris Udvarnoky) spends the long days playing games with his mischievous twin Holland (Martin Udvarnoky), while his Russian grandmother Ada (Uta Hagen) helps him hone his gift for astral projection. Still grieving over the recent death of the boys’ father, fragile Alexandra (Diana Muldaur) refuses to leave her room – much to Niles’ annoyance. When a series of mysterious death befall the family, Niles is quick to blame his twin – which comes as a shock to Ada, because Holland died some months before… 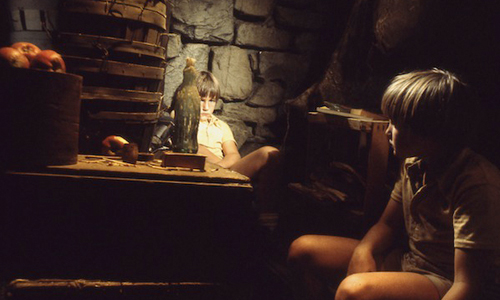 There have been all the others, but now there is The Other.
If The Waltons had ever been made into a horror movie, it would probably have looked a lot like this creepy psychological chiller from 1972, based on a best-selling American gothic chiller novel by actor-turned-novelist Thomas Tyron (he was the eponymous alien in I Married a Monster from Outer Space). Featuring richly textured photography from Robert Surtees (of Ben-Hur and The Graduate fame) and ably directed by Robert Mulligan (To Kill a Mockingbird, Summer of ’42), The Other maybe low on full-on frights, but it sure knows how to rack up the tension.

Lulling you into a false sense of security – before the big reveal – is Surtees’ soft-lensed photography, which evokes halcyon days of a carefree rural childhood (I was channelling my inner Tom Sawyer as I watched it). But behind the innocent play something wicked this way comes as Mulligan presents a unnerving depiction of a disturbed childhood. Is there something supernatural going on,  one that’s linked to the thing in the tobacco box that Niles clings to or in his ability to astral project? Is he a traumatised innocent or a sociopath in the making? Whatever you glean, The Other greatly echoes imaginative horrors like Cat People and the cryptic chills of The Innocents. It’s also an accomplished, unsetting creeper and an underrated original within the bad seed genre. 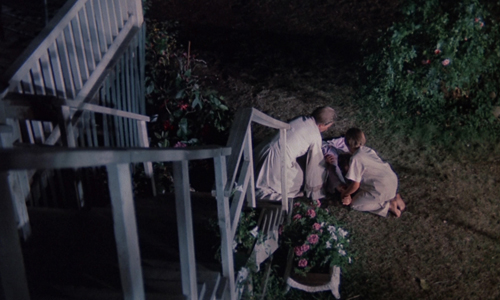 Chris and Martin Udvarnoky (in their only screen credit) give wonderfully naturalistic performances as cherubic Niles and cruel twin Holland, while double Tony Award-winning Broadway actress Uta Hagen is the film’s guiding soul, playing the concerned grandmother who, blaming herself for Niles’ state of mind, is forced to take drastic measures to save him. In 2010, Chris Udvarnoky died of polycystic kidney disease; while his brother Marty today works as a massage therapist in New Jersey. 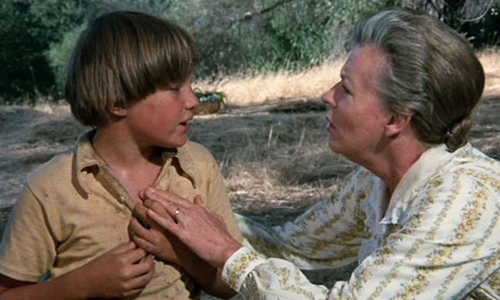 SPECIAL DUAL FORMAT (BLU-RAY + DVD) EDITION:
Eureka! Entertainment presents The Other on Blu-ray as part of a dual format edition in a new transfer of the film in its original aspect ratio, with optional English subtitles. A trailer is included, as well as a booklet, which features an essay on the film and a reprint of a 1972 interview with director Robert Mulligan.