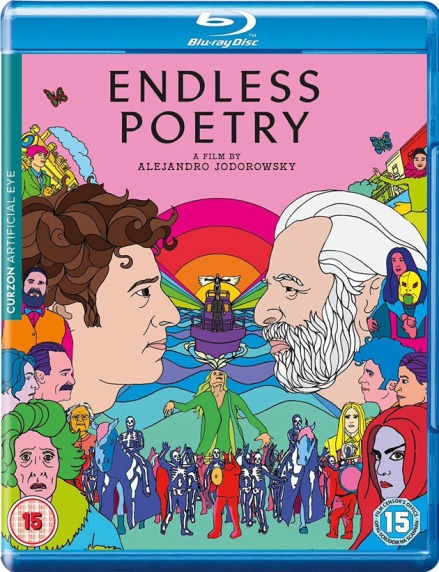 If you’re already familiar with the outré  cinema of Alejandro Jodorowsky, then you’re going to have a whole lot of fun spotting the real-life influences on his 1989 surreal horror Santa Sangre in this exuberant follow-up to his 2013 auto-biopic The Dance of Reality.

In 1940’s Santiago, alienated youngster Alejandro (Jeremias Herskovits) has an epiphany that his destiny is to become a poet. When he finally rebels against his ultra conservative father, Alejandro (now played by the director’s real-life son, Adan) moves in with a group of young anti-establishment artists, where he turns his hand to puppetry and clowning. Immersing himself in this carefree creative world, Alejandro’s metamorphosis leads him to discover an inner truth: that every path in life (both good or bad) is meant to be lived…

This is one Jodorowsky’s most personal films, where he strips away layers of ego to lay bare his inner self – and, in doing so, reveals up his influences for Santa Sangre. It’s also very much a family affair (both on and off-screen), for at the heart of his second auto-biopic is the troubled relationship that the director’s twentysomething self had with his father Jaime (played by another of Alejandro’s sons, Brontis).

Jodorowsky’s portrayal of Jaime is very much like the character of Orgo in Santa Sangre, which centred on the circus performer’s unstable son Fenix (who were played by brothers Adan and Axel) enacting revenge in the guise of his dead mother.

Watch carefully and you’ll spot a man with missing arms appearing in Endless Poetry. This is another reference to the director’s brilliant surreal horror in which Fenix’s mother Conchita has her arms cut off by Orgo after pouring acid on his testicles. Two other characters also appear – the Tattoo Lady (in the form of Alejandro’s red-headed muse) and the tutu-wearing Alma (as a dance-obsessed member of the art collective). 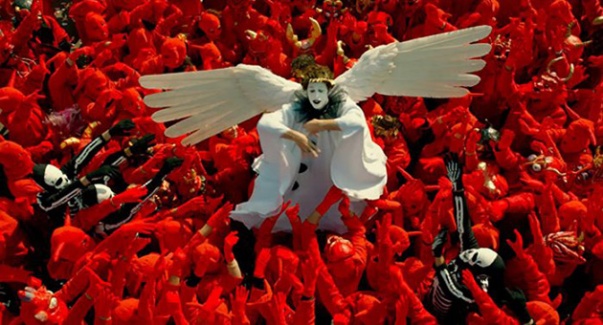 In Jodorowsky’s universe symbolism is everything, and here he weaves a visually-rich tapestry in which every image is a metaphor or signifier linked to the Tarot’s cycle of birth, death and renewal. Some images are quite strong – almost too much so, like the sex scene involving a dwarf having her period – but in Jodorowsky’s hand, these images become transformative rather than for shock value.

Others – like the incredible Day of the Dead carnival sequence – are just pure exalted joy. United these stunning images bring to visceral life the chaotic paths that we must all take to seek out our own inner truth, self enlightenment and life’s ‘endless’ poetry, which only Jodorowsky can get away with describing as ‘the luminous excrement of a toad that swallowed a firefly’ and make it sound truly beautiful.

It’s been a long wait between films for Chilean film director Alejandro Jodorowsky (something like 25 years), but it’s been worth it – especially as it has given the 86-year-old auteur the chance to layer this fantastical autobiography with the same mystical elements that he has been studying for over past 60 years, and which he brought together in his magnum opus The Way of Tarot.

Self-realisation, creativity and healing are the cornerstones of that profound study (of which I am a student), and Jodorowsky’s ‘psychomagic’ system is what also drives The Dance of Reality (aka La danza de la realidad), which re-imagines the young Alejandro’s unhappy childhood in the Chilean copper-mining town of Tocopill during the 1930’s.

‘The story of my life is a constant effort to expand the imagination and its limitations, to capture its therapeutic and transformative potential… An active imagination is the key to such a wide vision: it looks at life from angles that are not our own, imagining other levels of consciousness superior to our own.’ Alejandro Jodorowsky

Transformation is key to all of Jodorowsky’s creative endeavours and this comes to play big time in The Dance of Reality through the character of the father, Jaime (played by Alejandro’s oldest son Brontis), a stern disciplinarian who idolises Stalin, but who is just as much the tryant as his nemesis, Chile’s right-wing dictator, Carlos Ibáñez del Campo (Bastian Bodenhofer), whom he sets out to kill.

Jaime’s journey is all about the destruction of the ego, and this is manifested in the paralysis of his hands when his assassination plan fails and Jaime is propelled on a path of enlightenment and, after many surreal setbacks, finally back into the waiting arms of his family: young son Alejandrito (Jeremías Herskovits) and wife Sara (played by Chilean opera soprano Pamela Flores, who sings all of her lines).

Now, Jodorowsky could have portrayed his dad as a truly repulsive character, but instead gives him humanity – he’s both comical and sympathetic, and Brontis plays the granddad he never knew superbly. Jamie’s adventures – which sees him being rejected by his anti-Semitic peers, cast out of a shanty-town after the death of the hunchback dwarf who rescues him from the streets, and being tortured by the secret police – all lead to his rebirth (just like Jodorowsky’s gunfighter El Topo, the thief in The Holy Mountain and Fenix in Santa Sangre). It also serves to help Jodorowsky heal his own wounds in the process. 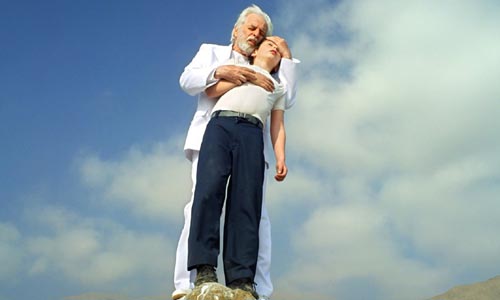 Jodorowsky’s films are always loaded with symbols, requiring multiple viewing to catch them all, and his latest opus is no exception – with death (both the mortality and metaphysical kind) being key. One scene that sent a shiver down my spine and still haunts me even now is when Jodorowsky steps into the action to stop his younger self from committing suicide. It certainly struck an unconscious nerve within me (or was it a memory), and thus proof positive of the transformative power of Jodorowsky’s cinema. A sequel, Poesia Sin Fin (Endless Poetry), which follows the artist’s quest for inner truth, is currently in production. I can’t wait.

The Dance of Reality (aka La danza de la realidad) premieres on Film4 at 1am on Tuesday 19 January 2017, and is also available on Blu-ray from Artificial Eye in the UK

Jodorowsky’s Dune gets a VOD release in the UK 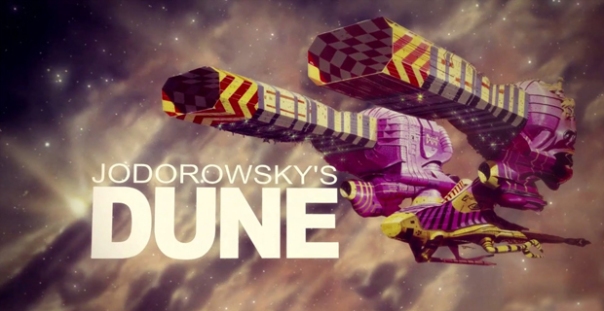 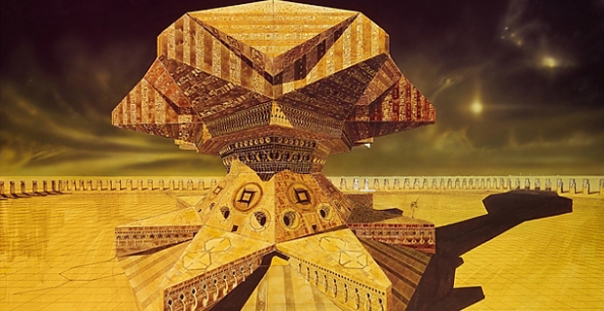 Over two years, the Chilean film-maker – best known for his surreal western El Topo and his mystical epic The Holy Mountain – and his team of ‘spiritual warriors’ worked furiously on the massive task of imagining Herbert’s universe: making storyboards, paintings, and even costumes. So what happened? 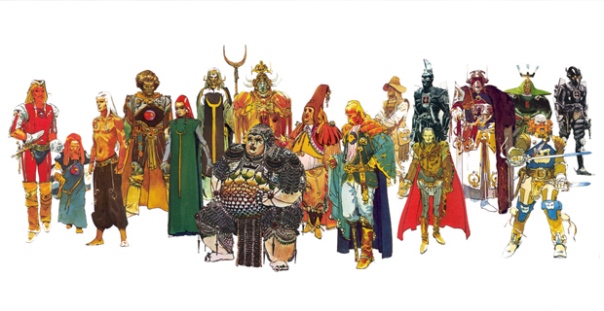 In creating what must be the best not-making-of documentaries ever made, Pavich hunts down the cast and crew of the aborted project from all corners of the globe to tell his tale, but the film’s real magic lies with the incredibly detailed book that Jodorowsky and his team assembled to woo the studios, and it’s the use of these pictures and storyboards that makes this the closest we’ll ever come to seeing Dune as the director intended.

Jodorowsky’s Dune, which premiered at the 2013 London Film Festival and was screened last year at the British Library as part of a special exhibition, with the director in attendance, has now gone straight to digital on pay-per-view VOD platforms, including. iTunes, Amazon Instant Video, blinkbox, Wuaki.tv and Google Play.

There’s no news of a UK DVD release as yet.