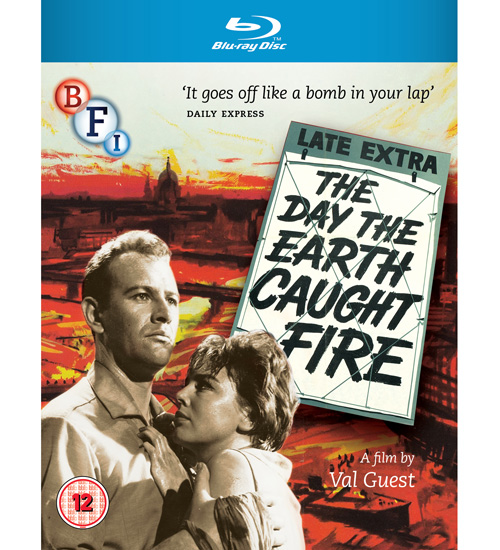 Newly re-mastered by the BFI National Archive, the definitive version of the classic 1961 British science fiction thriller The Day the Earth Caught Fire is released this week in the UK by the BFI on both DVD and Blu-ray, and contains a host of worthy extras, including a commentary with director Val Guest, a newly-created documentary, a selection of bomb-related archive films and much more. See below for the full list.

ABOUT THE FILM
It’s quite scary how many of the themes explored in director Val Guest‘s riveting end of the world drama, The Day the Earth Caught Fire, are still relevant today, especially with regards to global warming, domestic unrest (as witnessed in the 2011 London riots), the fear of another Cold War with Russia, and our love/hate relationship with the media.

Set almost entirely in the frantic Fleet Street newsroom of the Daily Express during an unseasonal heatwave, this restrained British disaster movies follows a group of journos as they investigate increasingly bizarre weather conditions, only to discover that atomic testing by the US and the USSR has knocked the Earth off its axis causing it to hurtle towards the Sun. As the world waits for its likely end, the city’s teenagers enjoy jazz-fuelled riots in the streets (and in bathtubs) and when more bombs are exploded to try to reverse the damage, two newspaper headlines are prepared: World Saved and World Doomed…

There’s more talk than action in this 1961 British sci-fi, but Val Guest’s brittle script and documentary-styled direction is intelligent and sincere, providing a vivid depiction of British newspaper journalism (before it went to the dogs) as well as important social commentary (especially about those ‘in charge’), while the excellent cast breathes authentic life into their well-rounded characters. TV’s Rumpole of the Bailey Leo McKern is just super playing a gruff science editor, Edward Judd (Island of Terror) is the fed-up alcoholic reporter who discovers his inner-hero as the crisis unfolds, and Janet Munro (The Trollenburg Terror) is the no-nonsense secretary who spills the beans on the testing.

Guest, who also co-wrote and produced the film, also makes brilliant use of the London locations, including Fleet Street, the Daily Express building and nearby St Bride’s Avenue, which only serves to give his sci-fi an unnerving reality. Alongside When Worlds Collide, Crack in the World and Dr Strangelove, this is a sci-fi classic of note that’s worth revisiting time and again.

BFI SPECIAL FEATURES
• New 4K transfer
• Hot Off the Press: Revisiting the Day the Earth Caught Fire (2014, 34min) An illuminating documentary about the film and its legacy.
• Audio commentary with Val Guest and Ted Newsom. I haven’t heard this all the way through yet, as I wanted to see the Blu-ray restoration first. Which is just fantastic!
• Interview with Leo McKern (2001) The sound quality might be poor, but McKern is fab and its set in a pub near St Bride’s Lane.
• Audio Appreciation by Graeme Hobbs (2014, 9min) Budding film reviews take note, Hobbs has a way with words here.
• Original trailer, TV spots and radio spots
• Stills and Collections Gallery
• Three nuclear films from the BFI National Archive: Operation Hurricane (Ronald Stark, 1952, 33min); The H-bomb (David Villiers, 1956, 22min); The Hole in the Ground (David Cobham, 1962, 30min). The inclusion of these illustrates why the BFI Archives are so important in maintaining the legacy of British film and TV history.
• Think Bike (1978, 1min) This road safety film with actor Edward Judd is a real gem
• Illustrated booklet with credits and essays
• Blu-ray exclusive. The Guardian Lecture: Val Guest and his wife, actress Yolande Dolan interviewed by David Meeker at the National Film Theatre (1998, 63min)

The Day the Earth Caught Fire is out now from BFI on dual format Blu-ray and DVD. Click here to order.