When the BBC1 TV series Doomwatch began hitting the headlines in the early 1970s and shows like On the Buses started heading into cinemas, Tigon’s Tony Tenser rushed out this big-screen spin off in the hope it would become the new Quatermass. But this ‘Chilling Story from Today’s headline’ was not the success that Tigon had hoped for, and ended up sitting on the shelf following its disappointing run in UK cinemas.

An ecological nightmare gone berserk!
A year after an oil tanker sinks off the west coast of England, Doomwatch scientist Dr Del Shaw (Ian Bannen) heads to the isolated island of Balfe to investigate the effects on marine life and discovers the local population have also been affected, creating physical abnormalities and turning the men-folk aggressive. Seeking out the aid of local teacher (Judy Geeson), Shaw then finds he has a battle on his hands trying to convince the locals he wants to help the, while also trying to get the Ministry of Defence and a chemical corporation to accept responsibility for the accident. 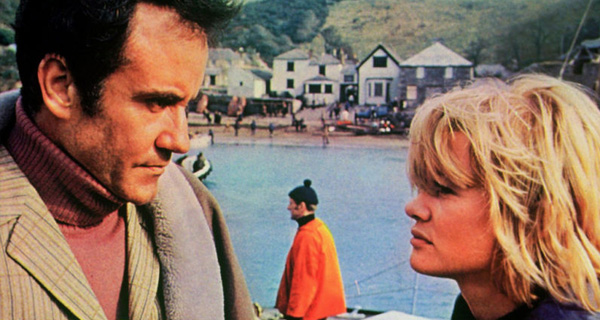 Director Peter Sasdy (Countess Dracula), cinematographer Ken Talbot (Hands of the Ripper) and production designer Colin Grimes (Nothing But the Night) do what they can with a script by Clive Exton (10 Rillington Place), that was part thriller, part horror, part ecological drama, and was shot on location around Polkerris and Falmouth in Cornwall and at Pinewood in October 1971.

But there isn’t enough depth, action or sense of menace to make it work, which also lessens the impact of Tom Smith’s effective makeup. Even the classic Doctor Who serial The Green Death, which used the mutations vs multinationals premise, is way more effective; and we all know how brilliant The Wicker Man turned out, a film which also followed an official’s investigation of a closed island community.

It was disappointing for fans of the TV show to see regulars John Paul and Simon Oates taking a back seat in the film, and their replacements are not that much cop either. Ian Bannen comes off as overly shouty and unempathic, while Judy Geeson seems like a fish out of water as the mainland school teacher who has no connection with the locals. At least she doesn’t eat their fish!

Future Bond star Geoffrey Keen and veteran actor George Sanders put in safe, but dull cameos, but its Shelagh Fraser who brings some unlikely comic relief as the nosey local who possesses the only phone on the island. And keen-eyed viewers will catch future EastEnders‘ star Pam St Clement playing one of the villagers.

Doomwatch has been digitally restored for a Blu-ray and DVD region free release by Screenbound Pictures, available from 20 June 2016