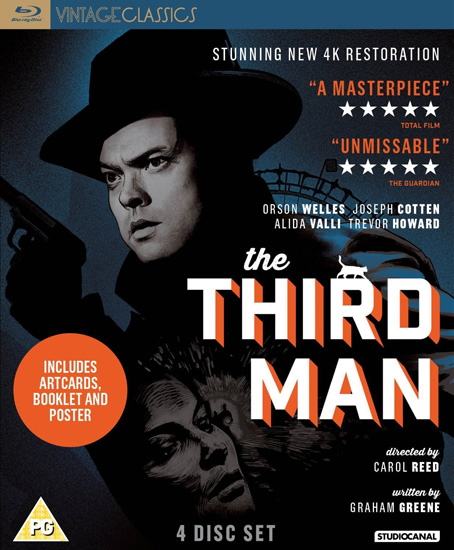 Once voted the ‘Best British film ever made’ in a poll by the BFI, 1949’s The Third Man has been given a stunning 4k restoration and is now available to own on DVD and Blu-ray in a collector’s edition that includes a host of brand new extras, from Studiocanal.

HUNTED…By a thousand men! Haunted…By a lovely girl!
Holly Martins (Joseph Cotten), a writer of pulp Westerns, arrives in post-war Vienna on the invitation of his childhood friend Harry Lime (Orson Welles). But on arrival he finds that Harry has recently been killed by a car whilst crossing the street, leaving a grief-stricken lover, Anna (Alida Valli).

When local British investigating office Calloway (Trevor Howard) claims that Lime was an unsavoury criminal, Martins accepts an offer from a local book club to stay in Vienna in order to clear his friend’s name. As he investigates his friend’s last hours, he grows closer to the doomed Anna, and learns of an unidentified ‘third man’ at the scene of the accident, who may hold the key to the deepening mystery surrounding Harry’s death.

He’ll have you in a dither with his zither!
Upon its release in 1949, director Carol Reed’s atmospheric thriller The Third Man instantly became a classic, winning the Grand Prix at Cannes, a BAFTA for Best British Film, and the Oscar for Best Cinematography for Robert Krasker. Featuring some of cinema’s most memorable set pieces and quotable lines, the film’s Viennese locations quickly etch themselves in the memory. The city may have been bombed out and strewn with rubble, divided into four sectors by the Allies, but it still stood tall in all its faded grandeur.

The film was also the masterwork of it’s key players – Carol Reed, Joseph Cotten and Orson Welles, as well as Graham Greene, who wrote the script while holed up in the now legendary Hotel Sacher, where Cotten’s Martins stays in the film, and composer Anton Karas, who was then a musician for hire playing in the wine gardens of Vienna when Carol Reed first encountered him. His six week work on the soundtrack resulted in a unique and melancholy zither score that has since become iconic.