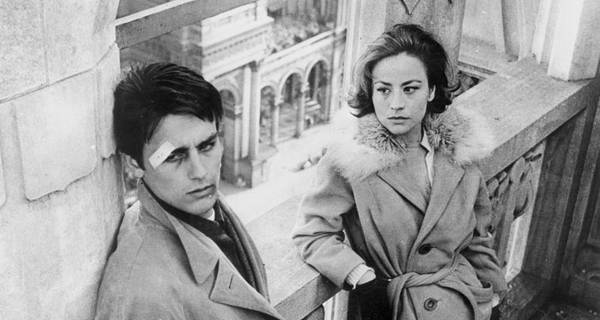 In 1950s Italy, recently widowed Rosaria Parondi (Katina Paxinou) and her four sons, Simone (Renato Salvatori), Rocco (Alain Delon), Ciro (Max Cartier) and Luca (Rocco Vidolazzi), leave their impoverished home in Bari in the south for metropolitan Milan where they hope to lodge with their eldest brother Vincenzo (Spiros Focás). But, on discovering he is to be engaged to young Ginetta (Claudia Cardinale) without her consent, Rosario makes a scene that insults his potential in-laws.

Finding temporary housing in the basement of an unheated block of flats, the family struggles to fit into a city where southerners are treated with the utmost disdain. Simone and Rocco soon begin to train as boxers, while Ciro sets about studying, and Vincenzo begins a family with Ginetta. Over time, however, Rosaria finds her southern values challenged, while her sons’ tight-knit bond becomes sorely tested… 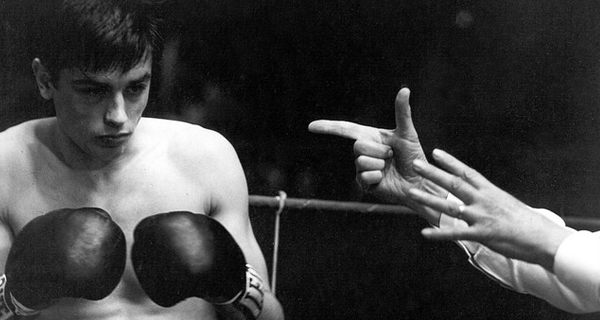 Taking inspiration from the novel Il Ponte della Ghisolfa by Giovanni Testori, Lucino Visconti weaves a working class melodrama that might seem grim, grey and angry on the surface, but it’s full of intensity and energy borne out by the sublime performances of Alain Delon, Renato Salvatori and Annie Girardot, whose characters are at the heart of this powerful, often violent tale of love, passion and morality.

Delon delivers one of his finest roles as the noble Rocco, a gentle soul who will go to the ends of the Earth to save his boxer brother Simone from the moral abyss that confronts him. Playing Caine to Delon’s Abel, Salvatori is a standout: raw, rough and the epitome of wounded pride; and as the spirited prostitute in love with both brothers, Girardot is totally captivating and makes for a truly tragic screen heroine. (Incidentally, Girardot and Salvatori married two years later).

But watch out for Katina Paxinou, her protective matriarch Rosario is the Italian mother personified. Her scene unleashing her wrath (complete with southern dialect profanties and gestures) on Girardot’s Nadia is one of the film’s most memorable, and identifiable, moments.

The film’s social statements may walk a thin line at times, but Visconti brings a neo-realist eye and an operatic sensibility to his episodic epic that grips you until the bittersweet end. But kudos go to cinematographer Giuseppe Rotunno’s film for bringing Visconti’s powerful imagery to luminous life. From the framing of the film’s four male stars in all their masculine beauty to the sweeping city vistas; and from the dark side-streets and shadow-lit boxing ring to Milan’s deserted Ravizza park where the film’s most violent scenes play out, Rotunno’s monochrome camerawork is breathtaking, while Nina Rota’s hypnotic jazz score is an atmospheric highlight.

Eureka’s Blu-ray, released as part of The Masters of Cinema series, features a HD presentation of the film (which reinstates two scenes cut by the censors) from a new 4k restoration, which also feature the following extras…

Posted in The Masters of Cinema, World Cinema