THE STORY – I THINK!
Marketing director Kris (Amy Seimetz) is targeted by a thief who steals her identity and assets and doses her with a mind-altering worm. A pig farmer/doctor/sound engineer (Andrew Sensenig) saves her. As she recovers, she meets Jeff (Shane Carruth), who also starts feeling ill. The couple start seeing each other. They have sex in a field where lots of pigs run about. Everything is bathed in diffused lighting. Some orchids turn blue. Jeff leaves his boring corporate auditing job. Kris is sacked from hers. A litter of piglets run about. Kris and Jeff start sharing the same memories and hear strange sounds in their heads. The pig farmer/sound engineer/doctor gets shot. After discovering she is infertile, Kris gets a piglet as a substitute child. The film ends as it begins…

PARDON?
Upstream Colour is described as a modern-day fable exploring the connection between nature and the human psyche, drawing on American philosopher Henry David Thoreau’s transcendental 1854 autobiography, Walden; or Life in the Woods as its inspiration. Part love story, part poetic science-fiction, it is the second film from Shane Carruth, who writes, produces, directs and acts here. Carruth’s previous film was the 2004 time travel tale Primer, which was made for just $7000 and won a Sundance Special Jury Prize for Sound Design. 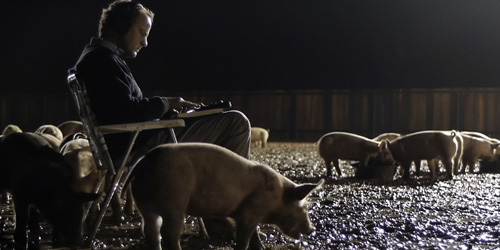 Upstream Colour has been hailed by critics as ‘visually imaginative’, ‘ground-breaking’ and ‘staggeringly original’, while its detractors have called it ‘pretentious’ and a ‘baffling mess’. As for me, well I remain… perplexed. There’s a mournful sense of emptiness and longing lurking in every shot, which often don’t link together, and I think Carruth is commenting on how we fail to connect with each other and the world (read: nature) around us.

Now, I might be totally wrong because I have never read Walden, but then maybe Carruth just wants us to mediate on what it could possibly be about – be it an allegory about love or a comment on self-medication, turning away from nature, and free will etc. If that’s his intention, then he’s certainly achieved it, despite the deadly dull characters who have more ‘issues’ than you can wave a stick at, ponderous story and wholly pretentious photography that wouldn’t look out of place in hipster ad campaign for Calvin Klein, Chanel or like. Whatever you think of it, Upstream Colour is truly one of a kind, and a film that certainly gets people talking. Cult destiny awaits!