← The Car (1977) | This supernatural race with the devil thriller is a wild ride indeed!
Little Shoppe of Horrors reveals the epic untold saga behind Frankenstein: The True Story →

The year is 1987, and NASA launches the last of America’s deep space probes.
In a freak mishap, Ranger 3 and its pilot, Captain William Buck Rogers,
are blown out of their trajectory into an orbit which freezes his life-support systems,
and returns Buck Rogers to Earth, 500 years later…

Following the success of Star Wars and Battlestar Galactica, US TV producer Glen A Larson turned his attention to the iconic American comic-strip character Buck Rogers, which he developed into a big-budget TV series for Universal.

Actor Gil Gerard was handpicked by Larson to play Buck (now an astronaut instead of a World War One dirigible pilot), but Gerard only accepted the role after changes were made to make the character more human than hero, but with a witty sense of humour (which Gerard often improvised).

The show ran for two seasons from 1979-1981, earning itself a legion of fans and even caused the ratings for Doctor Who in the UK to plummet.

The first season saw Buck assisting Earth’s Defence Directorate with a range of external threats, which saw a host of guest stars (including a few from the 1960s Batman series) playing either that week’s villain or someone in need of Buck’s help (see them all below). 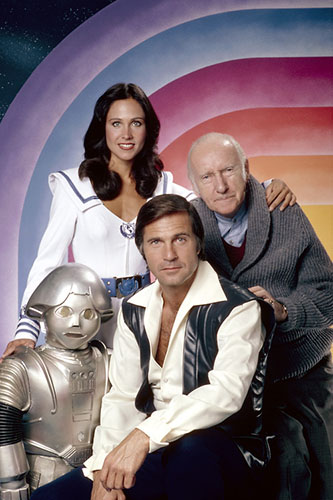 Following a stunning HD ‘Twiki’, the Technicolor disco-era sci-fi adventure is back and it looks and sounds better than ever. Boasting impressive sets and special effects (the spaceships, matt paintings and stargates all echoing the show’s comic book origins), and lots of big-hair, slinky outfits and sparkling lipgloss, as well as a great theme tune, this is one cult TV series that deserves a revisit. Let the adventures begin anew… 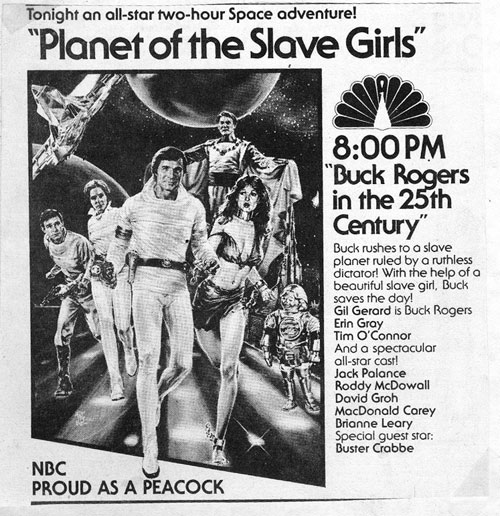 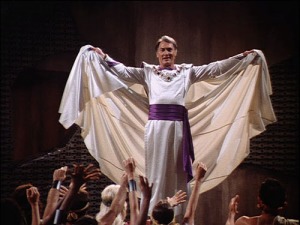 DISC 1
• Awakening: Awoken in the year 2491, Buck goes on trial, accused by being in league with Draconian Princess Ardala (Pamela Hensley) and her henchman Kane (Henry Silva). The feature-length opener was helmed by Daniel Haller, the former art director of the Corman-Price-Poe films.
• Planet of the Slave Girls: Jack Palance chews the scenery as a Messianic slave trader plotting to invade the Earth. This feature-length episode also has Buster Crabbe (aka the original Buck Rogers from the 1930s serials) making a cameo, as well as Roddy (Batman‘s Bookworm) McDowall and McDonald Carey (These Are The Damned).
• Buck Rogers in the 25th Century: Theatrical version of the pilot episode in Standard Definition. 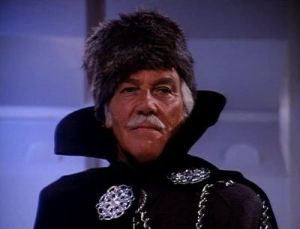 DISC 2
• Vegas in Space: A notorious smuggler (Cesar Romero, aka Batman‘s The Joker) seeks help in rescuing his ‘daughter’ from a crime boss (Richard Lynch).
• The Plot to Kill a City: Frank Gorshin (Batman‘s The Riddler) guests as the leader of a group of terrorists with unique abilities trying to sabotage New Chicago’s anti-matter power plant. Watch out for Anthony James (aka The Chauffeur in Burnt Offerings) as the deformed Varek.
• The Return of the Fighting 69th: A gang of oldies (led by Peter Graves) set out to stop the vengeful Corliss (Robert Quarry) from releasing a nerve gas.
• Unchained Woman: Buck springs a female inmate (Jamie Lee Curtis) from a penal colony, only to encounter a malfunctioning android prison guard.

DISC 3
• Planet of the Amazon Women: Jay Robinson (aka Dr Shrinker) guests a slave trader who auctions male prisoners off to the female population of the planet Xantia.
• Cosmic Wiz Kid: Gary ‘What’chu talkin’ ’bout, Willis?’ Coleman plays Hieronymous Fox, a child super-genius who gets kidnapped by Ray ‘Uncle Martin’ Walston.
• Escape from Wedded Bliss: Princess Ardala (Pamela Hensley) and her cronies, Tigerman (HB Haggerty) and Kane (now played by Michael Ansara) return with an alien weapon.
• Cruise Ship to the Stars: A beauty queen (Playboy Playmate Dorothy Stratten) is targeted by a transmute (Kimberly Beck and Trisha Boble) who is plotting to sell her genetics on the black market. Watch out for Return of the Fly‘s Brett Halsey as the Cruise Ship Captain. Tragically, Stratten was murdered eight months after this episode aired.
• Space Vampire: Buck and Wilma encounter a freighter crew infected by a mysterious virus. This week’s guest stars included Christopher Stone (aka Jaime Somers’ love interest in The Bionic Woman).

DISC 4
• Happy Birthday, Buck: Dr Huer finds an assassin is out to get him, while Buck turns bodyguard for a psychic (Dallas‘ Morgan Brittany). Blackploitation star Tamara ‘Cleopatra’ Dobson also guest stars.
• A Blast for Buck: Theo tries to solve a riddle in this clip show, which sees Gary Coleman back as Hieronymous Fox.
• Ardala Returns: The pesky princess and Kane create a clone of Buck.
• Twiki is Missing: John P Ryan (It’s Alive, Class of 1999) guests as a mining operator who sends out his psychic enforcers (including Dr Strange‘s Eddie Benton) to steal Twiki.
• Olympiad: US soap star Judith Chapman seeks Buck’s help to help her boyfriend defect from his repressive home world. This patriotic episode also guest starred Robinson Crusoe on Mars’ Paul Mantee.

DISC 5
• A Dream of Jennifer: A host of familiar names crop in this episode in which Buck is lured into a trap set by the warring Kovens, including Mary Woronov, Paul Koslo, Anne Lockhart and even Dennis Haysbert (who would go onto play an assortment of roles on the show).
• Space Rockers: Mind-altering music frequencies from popular band Andromeda are used to cause the galaxy’s youth to riot. Broadway star Jerry Orbach is the guest villain, and the funky song causing all the chaos was composed by Johnny Harris.
• Buck’s Duel to the Death: A ruthless warlord with a cybernetic implant (exploitation actor William Smith) challenges Buck.
• Flight of the War Witch: Princess Ardala is forced to help Buck go to the aid of the Pendarans, who are being ruled by an enemy race, the Zaads. Batman’s Julie Newmar is the War Witch, while other guest stars include Sam Jaffe, Vera Miles and Sid Haig. Available in two parts and as a feature-length episode. 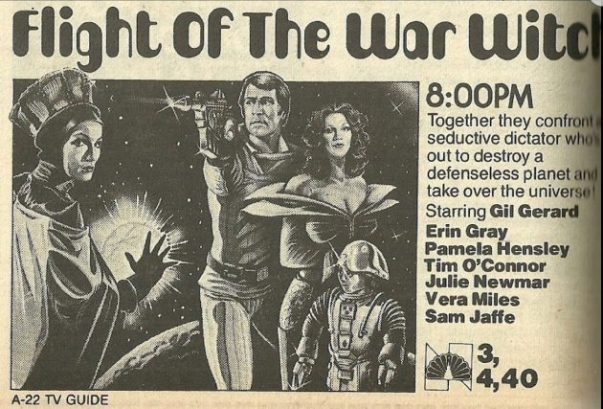 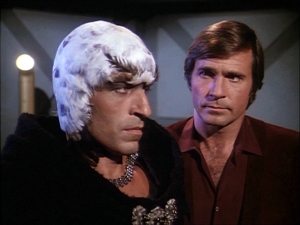 DISC 6
• Time of the Hawk: Season Two sees Buck, Wilma and Twiki join the crew of The Searcher and provides a great introduction for new character, Hawk: a part-human/part-bird alien with links to Easter Island.
• Journey to the Oasis: This two-parter sees Star Trek‘s Mark Lenard guest starring as Wilma’s former love interest and an ambassador that The Searcher escorts to a peace conference.
• The Guardians: Buck must fulfill his promise to a dying man in taking a cursed box to its new keeper (Harry Townes). The Outer Limits‘ Control Voice Vic Perrin plays the original Guardian, Star Trek‘s BarBara Luna is Koori and Buck’s mum is The Partridge Family‘s Rosemary DeCamp.

DISC 7
• Mark of the Saurian: Reptilian beings in human form give Buck nightmares. The Leech Woman‘s Kim Hamilton and Coffy‘s Barry Cahill guest star.
• The Golden Man: An alien with molecular-altering powers is sought out in a bid to save the Searcher from being destroyed. Dukes of Hazzard‘s Bruce M Fischer, voice actor Roger Rose and Anthony James guest star.
• The Crystals: Amanda Wyss (A Nightmare on Elm Street) plays a young girl on the planet Philoctetes is discovered to have a genetic link with a marauding mummy.
• The Satyr: Buck starts turning into a mythological creature while searching for lost colonists on the planet Arcadis. This episode scored the show’s only Emmy (for Outstanding Achievement in Music Composition) and was directed by Victor French (from Little House on the Prairie fame).
• Shgoratchx! Seven dwarves with telekinetic powers cause trouble and strife for the Searcher crew. Terror of Tiny Town‘s Billy Curtis and future Ewok Tony Cox guest star.

DISC 8
• The Hand of Goral: Buck, Hawk and Wilma find themselves on board a duplicate of the Searcher.
• Testimony of a Traitor: William Sylvester (Devil Doll, 2001: A Space Odyssey) guests as Buck goes on trial for high treason.
• The Dorian Secret: A Dorian warship threatens to destroy the Searcher unless a woman hiding a deadly secret be handed over to them. This was the final episode of the series.
• Journey to Oasis: This is the two-part syndicated version of another Daniel Haller-directed episode.

Posted on April 6, 2018, in Might See, Sci-Fi and tagged Buck Rogers in the 25th Century. Bookmark the permalink. Leave a comment.

← The Car (1977) | This supernatural race with the devil thriller is a wild ride indeed!
Little Shoppe of Horrors reveals the epic untold saga behind Frankenstein: The True Story →