By the late 1960s, those ghoulish purveyor’s of British Gothic horror, Hammer Films, needed more than Christopher Lee’s blood-shot-eyed Count Dracula to get bums back on the seats at local picture houses. What they needed was a good dose of sex and sadism. And so lesbianism reared its fangs in darkest Styria (just a couple of counties away from Karlsbad and Ingolstadt), where Ingrid Pitt put the vamp in vampire and the bite on some busty beauties, including Madeline Smith, Pippa Steele and Kate O’Hara, in 1970’s The Vampire Lovers.

In the first of two films for Hammer, Polish actress Pitt plays Mircalla Karnstein, the last remaining descendant of a family of vampires who conducted a reign of terror until Baron Hartog (Douglas Wilmer) took his blade to the heads of her undead loved ones. Now she’s back corrupting the daughters of a General (Peter Cushing) and a wealthy family headed up by Minder’s George Cole. But she’d better watch her head because Hartog and the General are hot on her tail…

A somewhat faithful adaptation of Sheridan Le Fanu’s 1871 Gothic novella Carmilla (that had been tackled by Carl Dreyer in 1932’s Vampyr and Roger Vadim in 1960s Et Mourir de Plaisir/Blood and Roses), The Vampire Lovers was Hammer’s first sex vampire film and their only co-production with American International Pictures (who were in Europe at the time making a new slate of Poe/Price films). 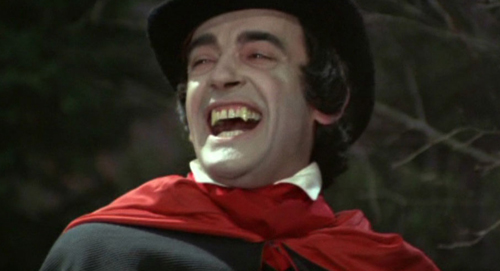 It was also a watershed moment for the studio as by taking advantage of the change in the age restriction for X-certificate films, from 16 to 18, they could now include more sex and nudity, something that would dominate their horror output for the remainder of the decade.

Thanks to Ingrid Pitt’s totally uninhibited portrayal of the nipple-sucking vampire, the UK censors got their knickers in a twist over the film’s overt lesbianism, but it earned Pitt cult status, and with English Rose Madeline Smith under spell, Pitt sent the pulses racing of young males everywhere. Meanwhile, the censors also got nervous over decapitation scene, something that the US censors cut out altogether.

Shot at Elstree under the helm of Roy Ward Baker (who was slightly embarrassed by the sex content), but making excellent use of Moor Park Mansion in Hertfordshire, the film also introduced something new to Hammer’s vampire lore: the sexual possession/addiction aspect of vampirism, which Kate O’Mara brings to the fore in her masochist governess, Madame Perrodot. 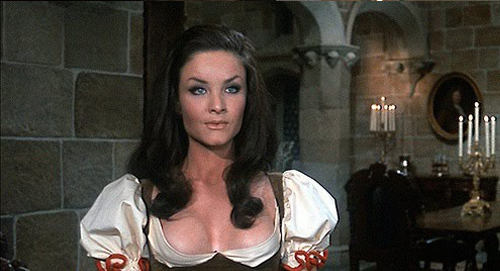 When it was originally released in the UK in October 1970, The Vampire Lovers was one of the country’s biggest money spinners, which resulted in Hammer continuing the Karnstein legacy in Lust for a Vampire (where Yutte Stensgaard’s Mircalla invades a girl’s finishing school) and Twins of Evil (where Damien Thomas’ Count faces off Peter Cushing’s puritan witch hunter).

THE FINAL CUT ENTERTAINMENT RELEASE
According to Hammer fans, including expert Jonathan Rigby (who co-hosts the audio commentary), Final Cut’s Region B digitally re-restored release (which came out on Blu-ray in November 2014 and gets its DVD debut on 14 March 2016) is regarded as the best home entertainment version available to date (an earlier Australian release had questionable audio, while the Scream Factory release contained an inferior transfer print). It’s also the most complete version as it includes a decapitation sequence that was cut from previous (US) versions. The extras include audio commentary with Rigby and Marcus Hearn (who really know their Hammer), a 25-minute documentary New Blood: Hammer Enters the 70s (which includes a look at the Hammer archives at De Montfort University in Leicester), stills gallery, original trailer, restoration comparisons; and subtitles for the hard of hearing. While Scream’s release may lose points on print quality, it does have, amongst its extras, an archive audio commentary with director Roy Ward Baker, actress Ingrid Pitt and producer Tudor Gates, who – alas – are all no longer with us.